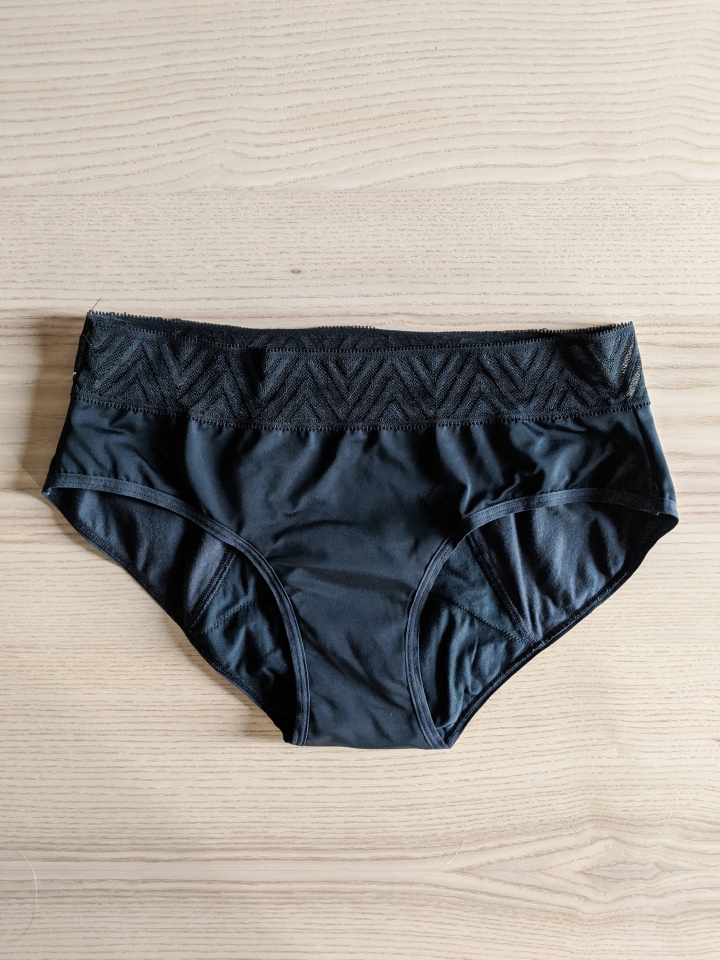 I don’t think you need a 10-paragraph history of my menstrual cycle for me to explain to you how my period underwear completely changed my life, but I’ll provide some highlights that I think are important for context:

I’d been curious about period underwear for a long time, especially given the ways that my IUD complicated my normal routines, but I was hesitant to spend the money on something that felt like new, uncharted menstrual territory. Then Leah posted a very helpful review of her Thinx, and I was convinced.

I bought three pairs, the Hiphugger, the Super Hiphugger, and the Sport. After my first five menstrual cycles with Thinx, I became a true convert and bought three more pairs (Air Bikini, Cotton Thong, and another pair of Hiphuggers in red). Using period underwear ended up being a really different experience than I expected, so I thought it would be helpful to provide a thorough review for you here.

Just a disclaimer: this post is not sponsored, and I bought these products with my own money. This post does contain affiliate links. If you purchase something using an affiliate link, I will receive a small commission.

What I Thought Thinx Were Going To Be Like

Wet? Diaper like? I honestly wasn’t sure. I sort of assumed they would be gross, but reading the overwhelmingly positive reviews all over the internet really intrigued me. I wish there was more period underwear available for purchase in retail stores so that people could touch and feel a pair before buying one. They ended up being so different from what I expected once they landed on my doorstep.

I would describe the construction of Thinx as very technical. It’s obvious that these were engineered to be absorbent and leak proof with multiple kinds of layers and linings. I don’t fully understand the mechanism that draws moisture away from the body and distributes it within the inner padding, but it works. Thinx do not feel wet. At most, they can feel a little…heavy? If I’ve been wearing Thinx overnight with no other backup method, they’ll probably feel heavy when I wake up in the morning. But they still don’t leak, even when they’re “full,” and I have yet to get blood on the sheets.

Because the Hiphugger and Super Hiphugger styles are designed to be the most absorbent, I personally don’t think they fit very nicely under regular clothes. The absorbent layer starts in the crotch area and continues onto the butt area (I know – I’m being very technical here), so the more absorbent the style, the more voluminous the panty, especially in the back. Even the Sport is a little too thick to wear with tight jeans, in my opinion.

The Thong and Air styles fit underneath clothes like a regular pair of panties, though, so I do wear those during the day on lighter days, or with a backup method on heavier days. I save the more absorbent ones for overnight.

How They Changed My Period

There is so much discomfort that comes along with periods. From the obvious cramps and blood in the underpants to the more nuanced aches and pains that are as unique to each menstruating person as a fingerprint, periods are universally un-fun. I personally feel like a molting snake – irritable, uncomfortable in my skin, and ready to lash out at anyone for anything. I get cramps. My skin becomes sensitive and is super irritated by menstrual products like pads and tampons. There are migraines at the beginning and end of each period that I refer to fondly as opening and closing ceremonies. It just sucks.

Thinx help. The fabric is comfortable and not irritating to my skin, and like I said before, they never feel wet, so there’s no terrible chafing feeling like if I were wearing a pad for a long time. Not constantly feeling wet an uncomfortable goes a long way in improving menstrual morale.

I like that there’s no sticking a foreign object inside my body, no strapping plastic and adhesives to my underwear, and no waking up in the middle of the night to change my dressings. Period underwear are comfortable on my body, and they’re convenient and easy to use. I wish that I could afford a whole drawer full, because if I could, I wouldn’t use anything else.

Some important factors that contribute to my obsession with period underwear:

Hygiene – In terms of hygiene, I feel much cleaner in my Thinx than I do wearing other menstrual products. Like I said before, they never feel wet, and they don’t become garbage once they’re full of blood. With period underwear, you just rinse them in cold water and then throw them in the washing machine like anything else. I either put mine in the washing machine with the rest of my clothes, or I’ll honestly just take the pair I was wearing the previous night in the shower with me in the morning and hand-wash them while my deep conditioner is in. And yes, I do keep a bottle of laundry detergent in the shower for this specific purpose.

In the summer I leave them on the terrace to dry (bonus: the sun kills bacteria!), and in the winter I leave them out on my windowsill. They do take a while to fully dry out, which is very annoying when you only have a few pairs, but I’ve heard that they’ll survive a tumble or two in the dryer if you’re really in a pinch.

I don’t change mine during the day if, for example, I’m at work, but theoretically you could if you had access to a private restroom and carried a little dry bag with you. I usually just use them in combo with tampons if I’m going to be out and about for many hours on a heavier day. I still haven’t completely perfected this since tampons do sometimes give me awful cramps. It’s hard to describe, but since getting my IUD, I’m like, VERY aware of where my uterus is inside my body. And I can tell when it is angry.

Zero-Waste – Though hardly the leading contributor of plastic waste in the world, periods can involve a lot of disposables, and it’s nice to use a method that reduces that impact somewhat. I’ve heard from some women who have been using the same few pairs of period undies for years. I’m hardly a zero-waste guru, and I do still use disposables, but I want to move toward a lower-waste period as much as I can given that I can’t use a cup. I’m a little uneasy with the narrative that the responsibility for global plastic pollution belongs to women and their periods, when actually it belongs to corporations and the governments they incentivize not to regulate them, but still. It’s good to reduce waste where possible.

Cost. Let’s start with the obvious. Thinx are expensive AF. When I bought my first three pairs, I used a discount code from another blogger for $10 off, and I created a three-pack, which got me an additional 10% off. Even with those discounts, I paid about $90 for three pairs of underwear (and I used Afterpay! Both times!!).

I don’t really agree with the assertion that they’re more cost effective because they last a long time – if you have a heavier flow, you’re going to need several hundred dollars worth of Thinx to cover an entire cycle. I don’t know about you, but I buy store-brand pads and tampons in bulk quantities – it would take me the rest of my menstruating years to spend as much money on generic tampons as I would on 10 pairs of Thinx. It would be amazing if period underwear was a little more accessible in that regard.

Sizing & Style. Presently, Thinx range in size from XXS-3XL. That still excludes a lot of would-be period-underwear fans in larger bodies. It would also be great if they explored more styles that were less feminized and had some non-binary models to showcase their products, because people all across the gender spectrum menstruate. The most absorbent style, the Super Hiphugger, only comes in one style with a lace trim. Not…everyone wants to wear a lace trim. (I don’t even like the lace trim, tbh)

“Toxic Chemicals” If you’ve been looking into Thinx, you might be aware that a Sierra Club reporter recently published an article describing the high levels of PFAS that were found in her pairs of Thinx when tested by a scientist at Notre Dame. I was pretty shocked and scared when I read it. But then I read it again, and I read the articles that it referenced regarding the toxicity of PFAS. I asked my husband, a chemist, to read them too. And I read the statement and the safety certifications that Thinx posted on its website in response. In the end, I trust the third party regulatory bodies that evaluate Thinx products on a regular basis more than I trust one instance of two pairs of underwear being tested by one individual scientist.

I struggle a lot with being an informed consumer while also maintaining a healthy suspicion of articles that reveal “toxicity” when in fact all they’re revealing is a poor understanding of scientific literature. I’ve made my choice in this instance to keep wearing my Thinx.

All in all, I really really love my period underwear. I rely on it when I’m at my most uncomfortable in my cycle, when I’m sick, and when I’m just feeling lazy and fatigued. They’ve changed my experience of my period for the better in pretty significant ways. At present, I own six pairs, and I’ll probably try to add several more to my stash over the next couple of years.

If you want to try Thinx for yourself, you can use my link for $10 off your first order. Questions? Let me know!

7 thoughts on “How Thinx Completely Changed My Period”